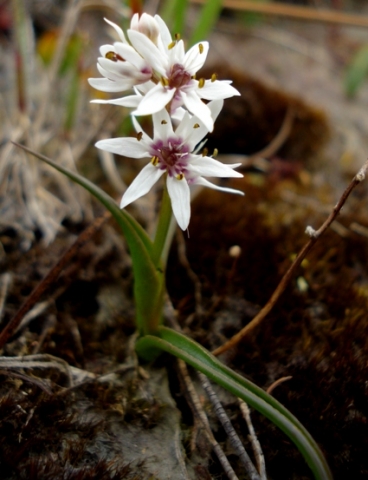 Wurmbea stricta, commonly known as waterphlox or in Afrikaans rysblommetjie (little rice flower), is a slender perennial reaching heights of 20 cm to 50 cm. This is a cormous plant, winter growing and summer deciduous.

W. stricta grows three dark green, stem-clasping, channelled leaves. The upper two leaves reach up the stem to just below the flower spike. The leaves are triangular in section, narrow and curving outwards, although the specific name, stricta, suggests they're straight.

This species was previously known as Onixotis stricta and still earlier as O. triquetra. All earlier names are "remembered" in the literature as synonyms, reflecting published recordings of the growing knowledge about the plant.

The species distribution is the western reaches of the Western Cape and northwards into Namaqualand, as well as in southern Namibia where the probability of finding suitable conditions for this water loving plant must be low. It also grows on the Eastern Cape coast west of Port Elizabeth. The species is not considered to be threatened in its habitat early in the twenty first century (Manning, 2007; iSpot; www.redlist.sanbi.org; www.plantzafrica.com).