Home » GENERA T-Z » Wurmbea » Wurmbea stricta flower
Back to Category Overview
Total images in all categories: 11,506
Total number of hits on all images: 6,488,417 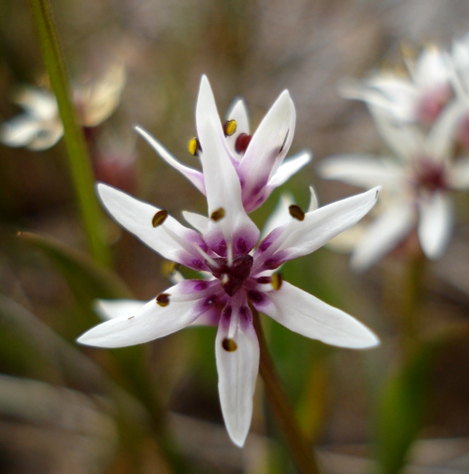 The stalkless flowers of Wurmbea stricta alternate in an erect, dense spike. The white or pale pink, pointed tepals, separate from each other to the base, spread in star-like fashion, ascending slightly.

The flower centre is dark from paired pink or purple markings near each petal base where the nectar is produced. Septal nectaries capable of secreting nectar from specially adapted glandular tissue are positioned at the base of the tepals in the Wurmbea genus.

The superior ovary adds to the dark colouring in the flower centre. Superior here means an ovary that is attached to the receptacle above the attachment points of the other floral parts, the tepals and stamens. the ovary is triangular and dark purple in the photo.

Three diverging white styles can be seen springing from the top of the ovary. Brown and yellow anthers are visible at the tips of the long white filaments.

Blooming happens from late winter to midspring. Pollination is mainly done by honeybees, while many other Wurmbea species have flies performing these duties (Manning, 2007; iSpot; www.plantzafrica.com).