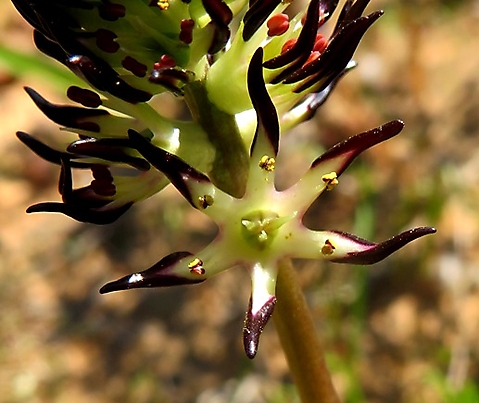 A Wurmbea spicata var. spicata flower has the bases of its six perianth segments joined slightly further out than only in the tube, continued in the whitish, spreading part.

The segments spread near the base and angle up after that, initially about white. Their shiny dark margins higher up join each other in the dark maroon end sections, not unlike spider-legs twisting and attenuating. The flower appears undecided between pleasing and scaring its viewer.

The six stamens are positioned over the perianth segments (one missing here). Their filaments emerge higher up than the segment bases, near the raised glands where the nectar is produced.

The three-lobed, three-locular ovary is greenish cream, situated in the mouth of the short corolla tube in the centre. Its three styles and stigmas are hard to see in the photo.

The flowers are strongly scented in the evening (Manning, 2007; Bean and Johns, 2005; Bond and Goldblatt, 1984; iNaturalist; www.fernkloof.org.za).