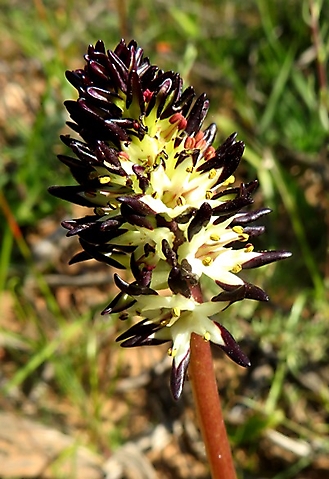 In this Wurmbea spicata var. spicata inflorescence the most recently opened flowers near the top of the spike have deep pinkish to red-brown, immature anthers. They soon pale to creamy yellow. The bilobed anthers are short and chunky, their filaments not easy to discern against the similarly pale colouring of the lower corolla parts. Dull greyish, tapering styles are visible in some flower centres.

The stamens of the newly opened and older flowers in the inflorescence appear to be the same height throughout. Filament elongation happens before anthesis (opening). That is, filament elongation as there may be, given that the filament bases of Wurmbea flowers are positioned fairly high up on the lobe sections, not in the base of the corolla (Manning, 2007; Bean and Johns, 2005; Bond and Goldblatt, 1984; iNaturalist; www.fernkloof.org.za).