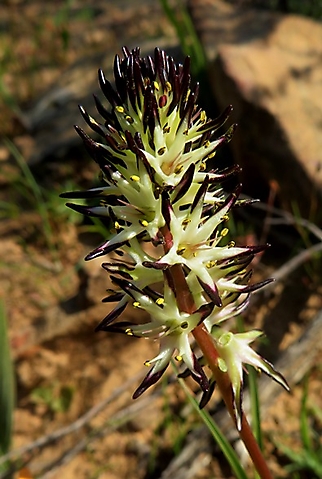 The open flowers in the Wurmbea spicata var. spicata inflorescence appear triumphant in the revelation of their creamy white inner corolla parts, after the buds had appeared so dark before.

The stalkless and bractless flowers are closely clustered at the top of the spike, slightly spaced in the lower, elongated part of the central axis. The shiny, blackish maroon to red purple tepal tips extend straight and ascending, pointed but slightly blunt-ended.

One dislodged flower hangs by a thread, showing the rolled under, dark margins over the pale lower tepal surfaces (Manning, 2007; Bean and Johns, 2005; Bond and Goldblatt, 1984; iNaturalist; www.fernkloof.org.za).