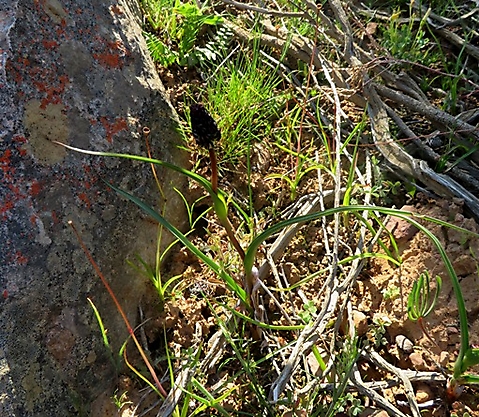 Wurmbea spicata var. spicata, commonly known in Afrikaans as swartkoppie (little black head), is a cormous geophyte. The long-necked corm in a thin, dark tunic is deep-seated with many small roots below. The corm is said to be poisonous.

The plant’s annual, above-ground parts reach heights up to 20 cm. In picture it presents curving, sometimes trailing stem-leaves and a nearly black cluster of buds.

This variety of W. spicata is distributed in the west of the Western Cape as far east as the west of the Little Karoo and Swellendam, also in the Northern Cape to Calvinia. The photo was taken in the Biedouw Valley.

The habitat is mostly renosterveld slopes where the plants grow in clayey and granitic soils. W. spicata is not considered to be threatened in its habitat early in the twenty first century, the prospects concerning this variety unknown (Vlok and Schutte-Vlok, 2015; Manning, 2007; Bean and Johns, 2005; Bond and Goldblatt, 1984; iNaturalist; www.fernkloof.org.za; http://redlist.sanbi.org).