Home » GENERA T-Z » Wurmbea » Wurmbea elatior flower
Back to Category Overview
Total images in all categories: 11,506
Total number of hits on all images: 6,488,618 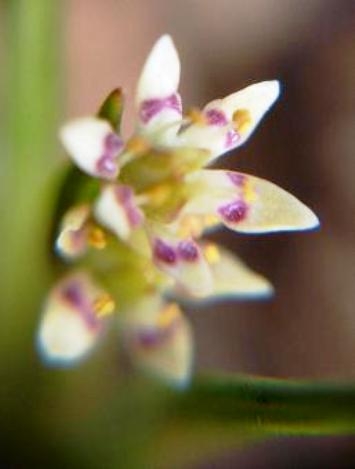 Wurmbea elatior, the pepper-and-salt flower, is a cormous perennial regrowing its deciduous above-ground parts in spring. In flower the plant may be over 35 cm tall.

Flowers grow in a spike with no bracts. The six tepals are marked in glossy purple halfway to their tips, the cream coloured tepals curving slightly inwards. Flowers are 1,5 cm in diameter.

The distribution of this plant is mainly inland in the Eastern Cape and widespread in Lesotho and over the border into the KwaZulu-Natal Drakensberg.

The habitat is montane grassland, usually near water. The species is not considered to be threatened in its habitat early in the twenty first century (Manning, 2009; http://redlist.sanbi.org).