Home » GENERA T-Z » Widdringtonia » Widdringtonia whytei, a Malawian tree
Back to Category Overview
Total images in all categories: 11,118
Total number of hits on all images: 5,787,228 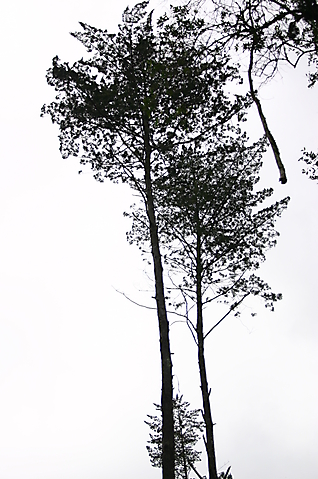 Widdringtonia whytei, commonly the Mulanje cedar, is the national tree of Malawi. It is a tall, wide-crowned forest tree reaching heights from 40 m to 50 m.

This is not a South African tree, the only of the four Widdringtonia species that is not South African. It is not a cedar but a cypress, although its pale reddish wood is aromatic. Aromatic timber is a feature shared by widdringtonias and cedars.

This is also not a form of W. nodiflora as was previously speculated, now confirmed from DNA research to be a separate species.

The evergreen W. whytei bears needle-like leaves spiralling up the branches during the sapling stage. These juvenile leaves are replaced on mature trees by short, scale-like leaves grown in opposite pairs.

Small and soft, male pollen cones and bigger, woody, female fruit cones occur separately on the same tree. The pollination is done by wind. The seeds may be retained on female trees for years, often only released by fire.

Mature trees lose their branches naturally to heights up to about 21 m, making the straight trunks sought after in the timber industry. This African tree of the tropics is well-known in the Mount Mulanje Biosphere Reserve in Malawi where it grows in the natural state. The trees grow in mixed, moist, montane forest conditions at elevations between 1500 m and 2200 m.

W. whytei is classified as critically endangered on the IUCN Red List. It is a forest pioneer, its saplings only found along forest margins, as the species is unable to regenerate within existing, dense forests.

Timber harvesting has become a species survival threat as the wood is valuable. Invasion by exotic pine trees like Pinus patula compounds the problem. Conservation measures have been put in place, but improving control remains important (Wikipedia; iNaturalist; www.arkive.org; http://www.iucnredlist.org).