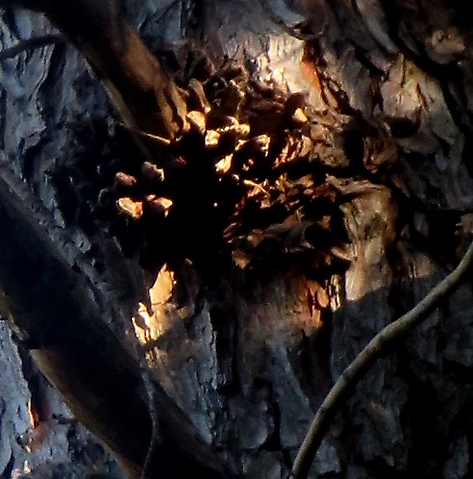 The female cones of this tree are large and nearly globose to elongated, about 2 cm in diameter. They are made up of four similar scales or valves that close after pollination, become woody and split open when the seeds are ripe. The outer scale surfaces of these cones are rough with few warty protuberances. There are female cones in various developmental stages to be seen on the tree throughout the year, as it takes two years from the growth of new cones until their seed is dispersed.

The male cones are small and soft, only 2 mm long. They grow solitary but in large numbers at small spur-branchlet tips. Each cone has six pairs of shield-shaped, leathery scales. Four pollen sacs are present at the base of each scale.

The somewhat flattened, dark brown seed, bigger than those of W. nodiflora, has a conspicuous, broad wing attachment, facilitating flight in dispersal. Wind is also the tree’s ally during pollination, thus the numerous male cones. The seed coat or testa is a hard crust or shell. Each seed has two green, needle-like seed leaves, lobes or cotyledons attached to the rest of the embryo.