Home » GENERA T-Z » Widdringtonia » Widdringtonia
Back to Category Overview
Total images in all categories: 11,116
Total number of hits on all images: 5,786,918 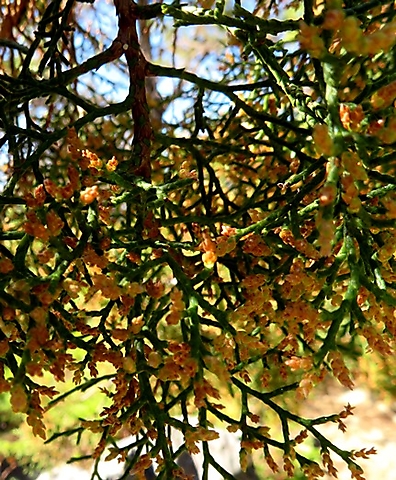 Widdringtonia is a genus of monoecious shrubs and trees in the Cupressaceae or cypress family. Monoecious means the plant produces single-sex cones on the same plant, not on separate plants.

Young leaves are needle-like and about spirally arranged on the stems. Old leaves are shorter, scale-like, growing in opposite pairs perpendicular to the previous pair (decussate), or alternate and usually pressed against the stems. The stems are mostly hidden under leaves.

The male cones are small, about 4 mm long, growing solitary at the tips of short side-branches. Each cone consists of about six pairs of decussate scales, rounded and leathery with about four pollen sacs at the base of each scale, positioned on its outside.

Female cones are larger, from 13 mm to 25 mm in diameter, growing solitary or clustered from leaf axils, often on elongated shoots. Most of these cones comprise four equal, corky to leathery scales appearing in a whorl. They close after pollination and open again to release ripe seeds, by which time they are woody. The outside surfaces of the ripe cone scales are smooth, rough or warty.

Several ovules are present on the inside of each scale base, as developing fruits need to be protected. Pollen, on the other hand, needs to be maximally distributed, especially in the case of wind pollinated species such as Widdringtonia. Therefore, the pollen sacs grow on the outside of the scales.

The seeds growing in the female cones are ovoid or three-angled and winged broadly or narrowly, the wings papery. The seed covering is crusted over two needle-like, green cotyledons, sometimes three.

There are four species of Widdringtonia, three of which occur in South Africa while Widdringtonia whytei grows in tropical Africa. The wood is fragrant, oily and resinous, therefore highly inflammable. The popular timber is light in colour and easily worked. These trees are suitable garden subjects, if they can be obtained.

The plant in picture is W. nodiflora, showing leaves and male cones. This is the only of the South African species not considered to be at risk early in the twenty first century (Leistner, (Ed.), 2000; Coates Palgrave, 2002; Poynton, 1975; http://treesa.org; http://redlist.sanbi.org).