Home » GENERA T-Z » Viscum » Viscum continuum attachment to its host
Back to Category Overview
Total images in all categories: 12,068
Total number of hits on all images: 7,360,633

Viscum continuum attachment to its host 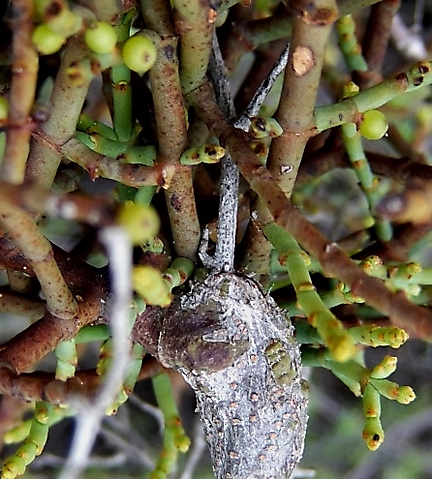 A thickened, woody part bulges where Viscum continuum connects to its host. This connecting part is the haustorium, the nutrient-absorbing outgrowth from the parasitic plant that penetrates the tissues of the host organism. The nexus through which liquid nutrition is accessed from the vascular system of the host is vital to the parasite.

In root parasites the haustorium is hidden underground, attached to a root of the host. Without this lifeline the parasite would die. The host would not mind, if it had one (Vlok and Schutte-Vlok, 2015; Shearing and Van Heerden, 2008; Bond and Goldblatt, 1984; iNaturalist).