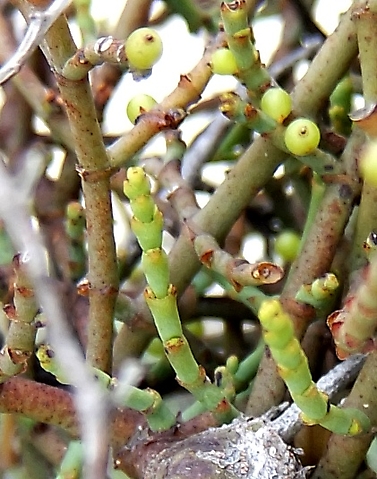 Previous
Image 9 of 19
Next

Young stems of Viscum continuum, a leafless hemiparasite, are green and can thus produce some of its nutrients via photosynthesis. Being leafless, the plant is unable to produce sufficient nutrition for independent existence, hence its status as a hemiparasite and not a holoparasite that would be totally dependent upon its host.

There are scale-like rings at the young stem nodes in lieu of leaves, becoming inconspicuous and further apart on old stems that gradually turn brown or grey.

There are bracts under the flowers growing at the nodes, persistent under the fruits (Vlok and Schutte-Vlok, 2015; Shearing and Van Heerden, 2008; Bond and Goldblatt, 1984; iNaturalist).