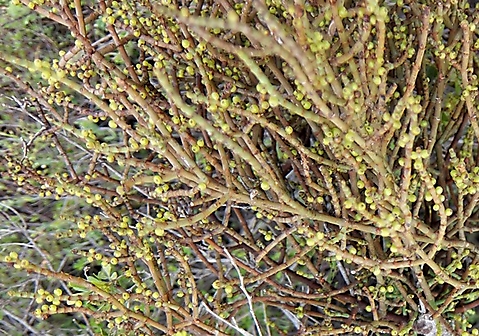 Previous
Image 6 of 19
Next

Viscum continuum, commonly known as the sweetthorn mistletoe, is a perennial parasite forming dense clumps of up to 1 m in diameter. It commonly grows on thorn trees, particularly Vachellia karroo.

When the photo was taken, this fact was not known, the host tree thought to be a Searsia. A glimpse of a Searsia leaf is even visible in picture. But the literature is clear and consistent about the plant growing on thorn trees. Whether there was an unnoticed sweetthorn in cahoots or entangled with the Searsia in the Kammanassie veld that Easter Weekend will never be known.

The unisexual florets of V. continuum are inconspicuous, subtended by two fused bracts forming a cup. The globose, greenish yellow berries, sometimes slightly translucent, are 5 mm in diameter and short-stalked. They develop from the female florets, abundant in winter and spring.

The species distribution is in the Western Cape eastwards from around Worcester across the Great and Little Karoo to the Eastern Cape.

The plants grow on flats and along rivers and watercourses. The species is not considered to be threatened in its habitat early in the twenty first century.