Home » GENERA T-Z » Viscum » Viscum combreticola
Back to Category Overview
Total images in all categories: 11,528
Total number of hits on all images: 6,611,607 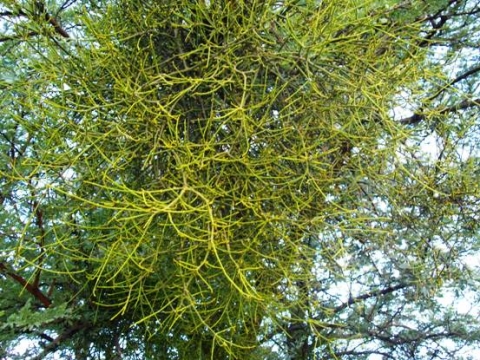 Previous
Image 5 of 19
Next

Viscum combreticola is a leafless, parasitic shrub that grows 2 m tall and wide on a variety of host plants, often Combretum and some Vachellia and Senegalia trees. The young stems are yellowish green, strongly ribbed and flattened, but becoming rounded and pendulous when older. The brittle stems exude a watery sap where the bark is broken.

Male and female flowers grow on separate plants, the plant being dioecious. The fruits are globose berries that appear in pairs at stem segment joints. They are orange coloured with tubercles on the surface that disappear as they ripen.

The plant is rare on the Witwatersrand, becoming more common to the north where it is common in tropical Africa. The plant is variable, but in a random way, not related to its geographical distribution (Tree Society of Southern Africa, 1974; www.ville-ge.ch).