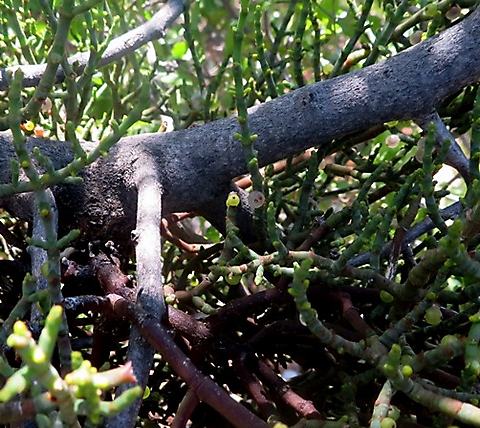 Viscum or mistletoe is a genus of (mainly) shrubby aerial parasites of the Santalaceae (some say Viscaceae) family.

The plants growing on branches of dicotyledon shrubs are hemiparasitic, meaning that they obtain part of their food from parasitism, the rest from photosynthesising themselves. The many brittle, usually dense branches are sometimes forked or whorled. The stems are cylindrical or compressed, sometimes ribbed, twisted and swollen.

The leaves are opposite and simple, sometimes very small and scale-like. Leaf margins are entire and there are no stipules.

The fruit is a one-seeded berry covered in a sticky layer. This sticky substance or birdlime causes seeds of the fruits consumed by birds to stick to branches when the birds rub them from their beaks. This allows the seed to penetrate the bark of the branch upon germination, starting the parasitic growth of a new plant. Birdlime also used to be smeared onto branches for catching birds.

Fruit colours range from white, yellow and orange to red. The fruits may be smooth or warty, some species having pedicels. The perianth segments persist on the fruit in some, while the style usually persists.

There are about 100 species in Africa and Asia, 17 of which are found in southern Africa. The plants are toxic to humans although they feature in traditional medicine. The fruits are widely eaten by birds and the plants browsed by stock and game.