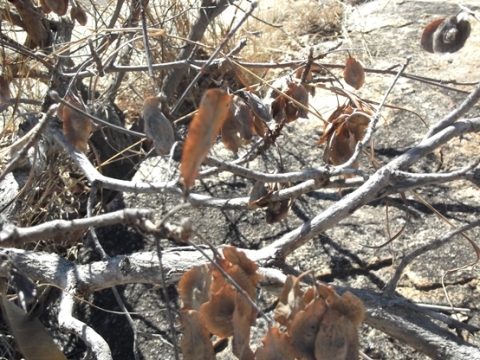 The fruit pods of Terminalia sericea seen here are old, having dried to a brown and even a grey colour. The photograph was taken in July near the Sabie River, where the tree had shed its leaves while many others of its kind in the area had not yet done so.

When the T. sericea pods are newly grown in spring or summer after the flowers, they are pink or rose-red to plum-coloured and look good among the silvery leaves or hanging just below them.

Each fruit contains a small nut in its flat pod. This fruit shape is referred to as a single-winged samara, i.e. a flat wing surrounding a hard seed. In this species the wing is broadly elliptic and slightly hairy. The wing becomes about 4 cm long and 2,5 cm wide. Corrugations on the wing of the fruit surface radiate out, appearing as veins on the central part.

The fruits dangle in clusters on stalks of up to 5 cm and may remain on the trees until the new flowers appear in the next year. The pods do not split open to release the seed (indehiscence).

The fruit of the silver cluster-leaf is sometimes parasitised, transformed into the tangled mass of a rusty-haired gall, possibly caused by mites (Carr, 1974; Coates Palgrave, 2002).