Home » GENERA T-Z » Terminalia » Terminalia sericea
Back to Category Overview
Total images in all categories: 11,241
Total number of hits on all images: 5,956,824 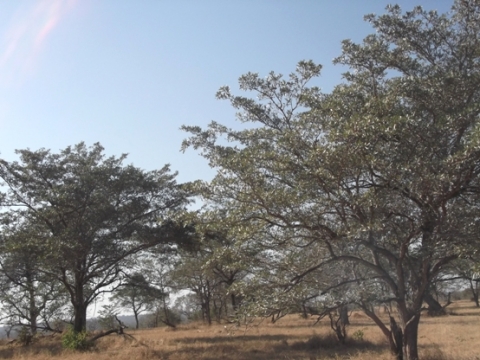 Terminalia sericea (SA Tree List No. 551), the silver cluster-leaf and in Afrikaans vaalboom (grey tree) or sandgeelhout (sand yellow wood), is a deciduous, small to medium-sized tree of the northern parts of South Africa and inland in southern Africa. It grows at elevations ranging from sea level to 1600 m. At the coast it is found in the south of Mozambique and north of KwaZulu-Natal.

This tree may be a pioneer in open woodland and bushveld, even be the dominant species in some parts. It is usually restricted to deep sandy soils, often at vlei margins and seeps. On slopes it may be restricted to narrow strips along specific elevations, depending on the underground formations of rock slabs determining water availability. In drier areas one may see it near stream banks.  In some parts of the Kalahari this tree comprises a major component of the biomass present.

Typical mature tree size is about 8 m tall and spreading as widely. There is usually a flattish crown and some bare trunk showing at the base. The occasional 12 m tree exists. The vaalboom will be encountered near the Pretoriuskop rest camp of the Kruger National Park where it is particularly numerous (Carr, 1974; Coates Palgrave, 2002).