Home » GENERA Q-S » Selago » Selago villicaulis
Back to Category Overview
Total images in all categories: 11,104
Total number of hits on all images: 5,771,485 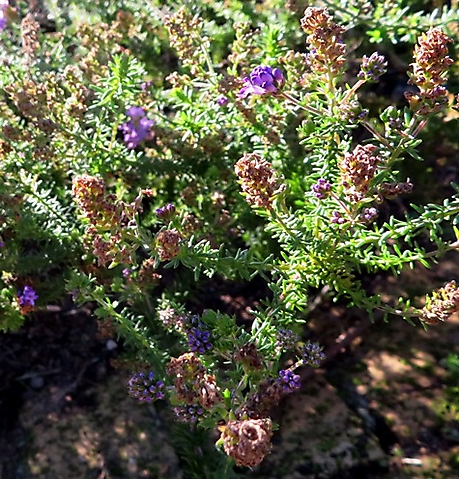 Selago villicaulis is a much-branched perennial reaching heights to 40 cm. The stems are densely hairy, the hairs soft and whitish. The specific name, villicaulis, is derived from the Latin words villus meaning shaggy hair and caulis meaning a stalk, referring to these hairy stems.

The photos of the plant shown in this Album taken at Kirstenbosch may be the ‘Purple Turtle’ cultivar developed there by systematic selection from seedlings.

The species distribution is in the Western Cape along the southern Cape coast from Stilbaai to Knysna.

The habitat is strandveld thicket, fynbos and stable dunes in sandy or limestone derived soils. The species is considered to be vulnerable in its habitat early in the twenty first century, due to coastal development and alien vegetation invasion (Bond and Goldblatt, 1984; iNaturalist; http://pza.sanbi.org; http://redlist.sanbi.org).