Home » GENERA Q-S » Schotia » Schotia latifolia
Back to Category Overview
Total images in all categories: 11,635
Total number of hits on all images: 6,753,054 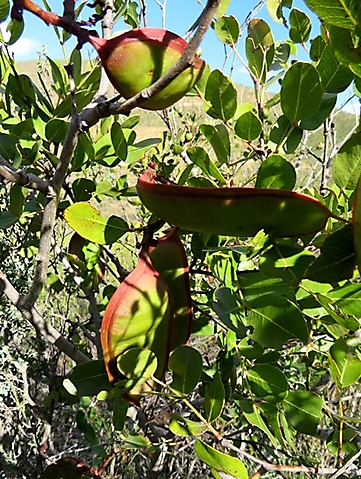 The bark is smooth and red-brown to grey, the young stems usually hairless.

The species distribution is mainly in the coastal half of the Eastern Cape, extending in lesser prevalence to the Western Cape, Kwa-Zulu-Natal and the Mpumalanga and Limpopo Lowveld; also occurring in some neighbouring countries. The photo was taken in the Kouga.

The habitat is forest, dry scrub forest, evergreen forest margins and bushveld, often on stony slopes. The species is not considered to be threatened in its habitat early in the twenty first century (Coates Palgrave, 2002; Schmidt, et al, 2002; Pooley, 1993; iNaturalist; http://redlist.sanbi.org).