Home » GENERA Q-S » Schotia » Schotia capitata
Back to Category Overview
Total images in all categories: 11,635
Total number of hits on all images: 6,753,218 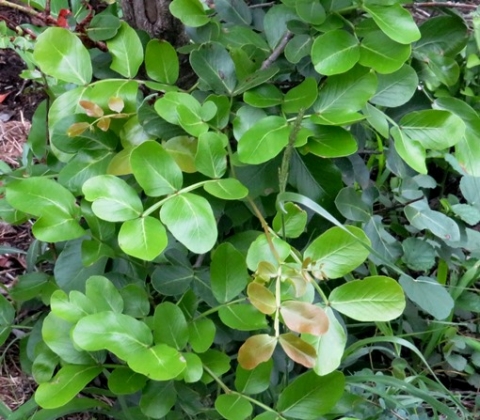 Schotia capitata, the dwarf boer-bean, is a usually multi-stemmed shrub, sometimes semi-climbing or a small tree, occasionally reaching a height of 7 m (SA Tree List No. 203).

Its fresh young leaves are pale green and glossy, starting off reddish brown before they reach their full size. Older leaves are darker green, retaining some shine. The leaves are paripinnate (compound without a terminal leaflet). From three to five pairs of leaflets are grown, the upper ones usually bigger than those below on the rachis. Leaflet shape is elliptic to nearly rounded, although in the photo few adhere to the same or a quite regular shape. Leaflet tips may be pointed, rounded or notched. The leaflet base tapers or is rounded and often asymmetric. Leaf hairiness does occur, not always. Game browses the leaves.

The species is distributed in the east of South Africa in the Eastern Cape, KwaZulu-Natal and Mpumalanga, as well as in some neighbouring countries. This plant was photographed near the Crocodile River in the Mjejane Game Reserve.

It grows in hot, dry bushveld in heavy soil, often among thorn scrub where it may form thickets. The species is not considered to be threatened in its habitat early in the twenty first century (Coates Palgrave, 2002; Pooley, 1993; iSpot; http://redlist.sanbi.org).