Home » GENERA Q-S » Schotia » Schotia brachypetala anthers without visible pollen
Back to Category Overview
Total images in all categories: 12,068
Total number of hits on all images: 7,360,720 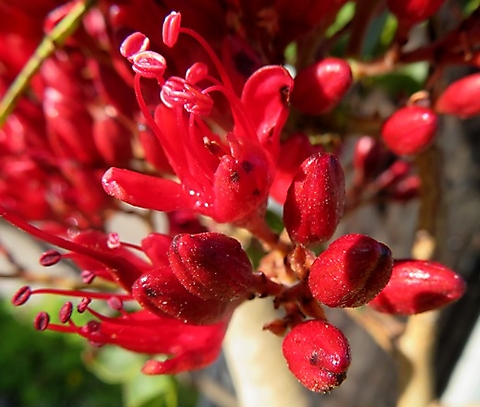 The chunky, lobed anthers are attached in their midsections to the filament tips that curve slightly, only near their tips. Pollen sacs reside in the two lobes or thecae of each anther. Longitudinal slits open when the pollen is ripe.

The botanical discovery that pollen needs to be transferred to the stigma for fruit forming only happened in 1682, discovered and communicated by the English botanist, Nehemiah Grew. His observation was apparently not believed until Linnaeus confirmed it half a century later. Another fifty years later, a German called Sprengel discovered that many flowers cannot accept their own pollen, but wait for a grain or grains from another flower or other flowers to arrive. Another step in the knowledge growth of how all this works came 70 more years later from the observations and insights of Charles Darwin.

The habit of taking for granted what has been discovered earlier as common sense and believing that current knowledge is roughly complete, still continues in spite of the continued acceleration of scientific discoveries. Curiosity, persistence, logic and avoiding group think are some of the antidotes that turn some ordinary people into scientists.

Pollinators may consider the messy attachment of pollen grains to their bodies (and losing them promptly to other sticky floral parts), as an unavoidable nuisance associated with dining out on flowers. Or they may not give it a thought at all, which is more likely in the (also) happy world where thought doesn’t enter (Coates Palgrave, 2002; Schmidt, et al, 2002; Leistner, (Ed.), 2000; Pooley, 1993; Stoneman, 1928).