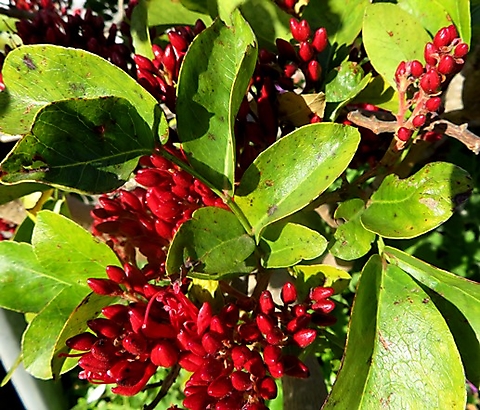 Schotia is a genus of thornless, mostly deciduous trees and shrubs in the Fabaceae or pea family.

The leaves are paripinnate, meaning compound without a terminal leaflet. There are from three to eighteen leathery leaflets to a leaf, those near the tip of the leaf often bigger than those near the base. The stipules are small, dropping off early.

The inflorescence is a short, many-flowered panicle or raceme grown from a stem-tip or leaf axil, often on old wood. The bisexual flowers are red or pink on short pedicels. The bracts drop off early. The calyx is about bell-shaped or top-shaped, ending in four sepal lobes that are longer than the tube at its base; the lobes persist during fruiting. There are five slightly unequal petals growing from the calyx tube mouth, sometimes only thread-like and falling early.

There are ten stamens growing with the petals and sometimes joined at the base. The superior, short-stalked ovary houses many ovules. The ovary has unequal sides heralding the eventual pod-shape of the fruit. The cylindrical style ends in a compact, head-like stigma.

The fruit is an oblong or broadly linear pod, often woody and sickle-shaped, sometimes beaked. It is laterally compressed with a hard rim or wing along the upper seam or closure. The pod dehisces poorly and slowly, the rim often remaining on the tree when the valves part.

The seeds are smooth and brown, between 1 cm and 2 cm in diameter, sometimes with a yellow aril attachment and sometimes remaining attached to the pod rim.

There are five Schotia species, all found in southern Africa south of the Zambezi. The quite variable schotias were earlier divided into 15 species, reduced to four by Codd in 1956. There are two different, natural hybrids of Schotia afra and S. latifolia found in small regions in the Eastern Cape.

The common name of boerboon (farmer bean) is derived from the earlier use of the ground-up seeds as a coffee substitute. The seeds are edible, either green or mature, sometimes roasted and ground. These trees serve well as shade or ornamental trees, also as bonsais. And, as so often with the plants of southern Africa, also Schotia plant parts are used in traditional medicine, apparently not enthusiastically supported by science. The leaves are browsed by stock and game. The bark has been used in tanning.