Home » GENERA Q-S » Schotia » Schotia brachypetala inflorescence
Back to Category Overview
Total images in all categories: 11,901
Total number of hits on all images: 7,141,942 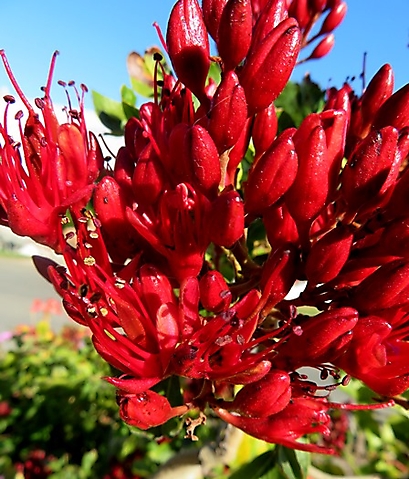 The late winter and spring inflorescences of Schotia brachypetala may be bright red and replete with promising buds, beside the open flowers sporting their styles and stamens for all to see and some to touch. Pointing up and eager for the viewer or camera appears the general trend, followed as far as the pedicels will allow in the busy crowd of expanding floral participants.

The promise of success in inflorescences on a weeping boer-bean tree thus covered in blooms, is often not fulfilled when fruit pods are counted on the same branch later; the exuberant early production effort unmatched by the modest output at the end, similar to the fervent start of a popular marathon race contrasting against performances at the finishing line.

The weeping boer-bean is after all a big tree, taking up much space in the mixed vegetation of bushveld and woodland where it resides. Maintaining and not overdoing its welcome presence does not require undue seed germination or sapling establishment. Not all species threaten their ecologies by excessive reproduction (Coates Palgrave, 2002; Schmidt, et al, 2002; Leistner, (Ed.), 2000; Pooley, 1993).