Home » GENERA Q-S » Schotia » Schotia brachypetala
Back to Category Overview
Total images in all categories: 11,901
Total number of hits on all images: 7,142,199 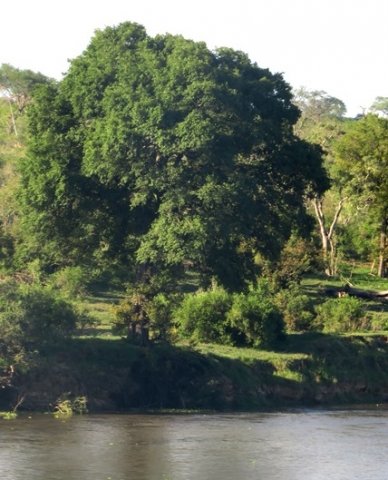 Schotia brachypetala, commonly known as the weeping boer-bean and the huilboerboon in Afrikaans, has grown an imposing crown here by the Crocodile River in the Kruger National Park. This tree counts among the giants of South Africa and Africa, reaching heights of 16 m when conditions are favourable (SA Tree List No. 202). The proximity to a river or termite mound adds to the growth capacity of those specimens so lucky as to live in such places.

When the broadly spreading crown reaches the rare height of 22 m there is a lot of tree to deal with. The bright green foliage of the annual growing season casts a substantial shade during hot summer days. These trees also occur in arid bushveld and dry woodland where more modest mature heights start at around 3 m.

The species is distributed coastally in the east of the Eastern Cape, widespread in KwaZulu-Natal, in the Mpumalanga Lowveld, the north of Gauteng and widespread in Limpopo.

The habitat is deciduous, open bushveld, woodland and scrub forest, typically in warm areas at lower altitudes. The trees thrive near rivers and on termite mounds. It is not considered to be threatened in its habitat early in the twenty first century (Coates Palgrave, 2002; Pooley, 1993; http://redlist.sanbi.org).