Home » GENERA Q-S » Schotia » Schotia brachypetala, the well-known one in Kirstenbosch
Back to Category Overview
Total images in all categories: 11,635
Total number of hits on all images: 6,752,977

Schotia brachypetala, the well-known one in Kirstenbosch 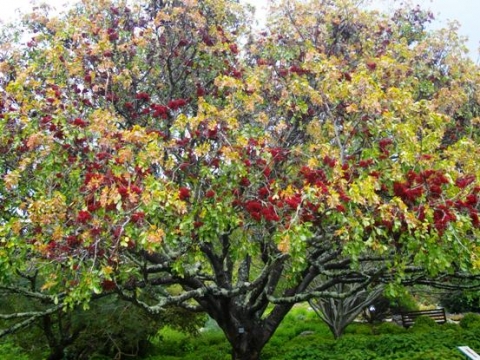 The distribution of Schotia brachypetala lies in the north-eastern parts of South Africa; not the Western Cape. But just look at the exuberant blooming and new foliage of this weeping boer-bean tree that thrives in Kirstenbosch!

Trees don’t know national borders. Their distributions in nature end where the conditions for growing become intolerable. People started off like that too! We made national borders and subsequently declared some plants alien and exotic. When they are planted in faraway places, the absence of their natural enemies may cause their numbers to multiply to the detriment of the local ecologies... as people do.

Mixing and matching is the human way of gardening. Nature has more time than people. It changes distributions of biological species in its own way, naturally.

Our lives would be so much poorer without the migrant and immigrant plants that are prepared to perform wherever we plant them. Not all plants cope with changed habitat.

Others cope far too well and invade. Our food, medicine, clothing, living environment and cultural pursuits are infinitely enriched by the thousands of plant species that followed us to wherever we choose to live on earth.