Home » GENERA Q-S » Schotia » Schotia afra var. afra in the Little Karoo
Back to Category Overview
Total images in all categories: 11,635
Total number of hits on all images: 6,753,007 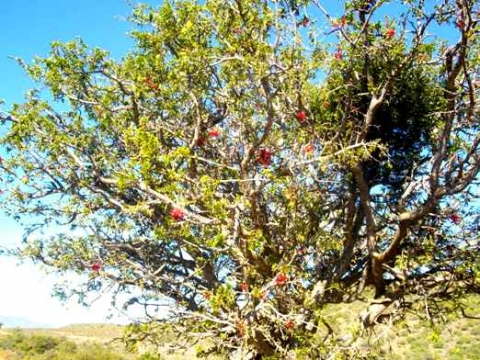 Previous
Image 2 of 28
Next

This Schotia afra var. afra tree was photographed in April in the southern Little Karoo near Van Wyksdorp. It grew a rounded, spreading crown upon a sturdy frame with much branching in the periphery.

What appears to be satisfactory flowering and a generally untroubled exterior suggest comfort in its setting, but for the scantiness of the foliage.

Red is a rare enough vegetation colour in this countryside to attract attention widely. Prospective pollinators, photographers and less well-intended users are all alerted by the spectacle.

The seeds of this tree have been eaten by people as long ago as the Late Stone Age, according to archaeological evidence (Coates Palgrave, 2002; iSpot; Pooley, 1993).