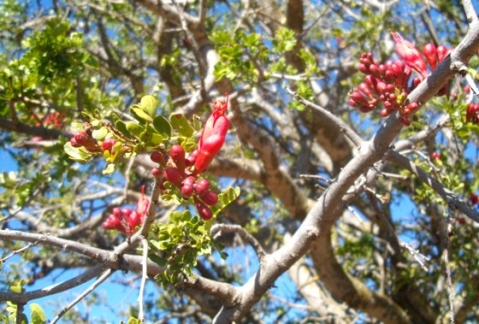 Previous
Image 7 of 28
Next

The bark of Schotia afra var. afra is pale grey and fairly smooth; no evidence here yet of the cracking and fissuring reported to occur on large stems. This tree was seen near Van Wyksdorp in the Little Karoo. Several branches are angled nearly perpendicular to the stems they grow from, although this does not happen consistently.

Leaflets, from 6 to 11 pairs per pinnate leaf, have rounded tips and are positioned closely together in the leaves. This tree is in a life phase of producing more flowers than leaves.

S. afra hybridises with S. latifolia, the two species overlapping in distribution in the south-east of the country; the recorded hybrids occurring in an area further east in the Eastern Cape. South of the Langeberg, roughly at the same longitude as this tree, a low-growing shrub form of S. afra is said to occur (Coates Palgrave, 2002; iSpot).