Home » GENERA Q-S » Schizochilus » Schizochilus zeyheri
Back to Category Overview
Total images in all categories: 11,230
Total number of hits on all images: 5,941,909 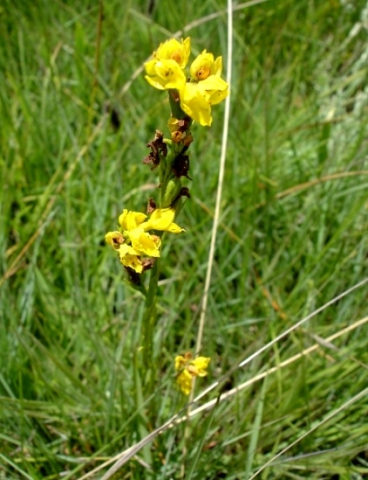 Schizochilus zeyheri is a terrestrial orchid, a slender herb growing an annual flower stem and leaves from a perennial, underground tuber. The plant reaches heights from 15 cm to 60 cm. This photo was taken near Sabie in February.

When the flower spike is newly formed, it nods or is arched, covered continuously in flowers until the last one morphs into a fruit. As the spike lives through its season, flowers get pollinated and wither. Towards the end the older spike becomes erect as in the picture.

The Schizochilus genus comprises about 20 species, eight of which grow in South Africa. Schiza is a splinter in Greek and cheilos a lip. There are typically two distinct slits on the tip of the lip, propably what is referred to in the generic name (Pooley, 1998; iSpot; www.pacificbulbsociety.org).