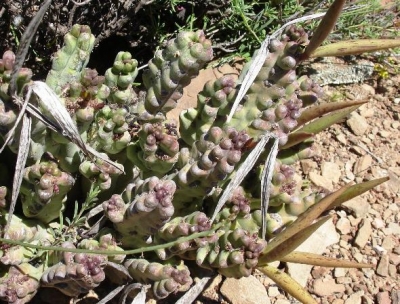 Quaqua ramosa, previously known as Caralluma ramosa, is a dwarf succulent growing a clump of erect four-angled stems to heights around 30 cm.

The flowers grow in dense, sessile clusters scattered along the upper parts of the stems. The flowers have semi-erect, narrow, petal lobes folded almost double longitudinally. The dark maroon colouring on the finger-like pointed petals, contrasting against the dull appearance of the stems and the ambient colour scheme of the terrain, bring a quite spectacular  contrast. Looking down into the flower centres, small white sections can be seen.

The plant in picture shows the fruits, dull, olive green, paired follicles with reddish markings resemble antelope horns. The follicles split on the side, releasing seed with hairy attachments in wind dispersal.

The species distribution is in the Western Cape in parts of the southern Karoo from Laingsburg to Prince Albert, the western Little Karoo near Ladismith and south of the mountains near Riversdale and Swellendam.

The plants grow in the open on stony slopes and flats in karoid conditions. The species is not considered to be threatened in its habitat early in the twenty first century (White and Sloane, 1937; http://redlist.sanbi.org).