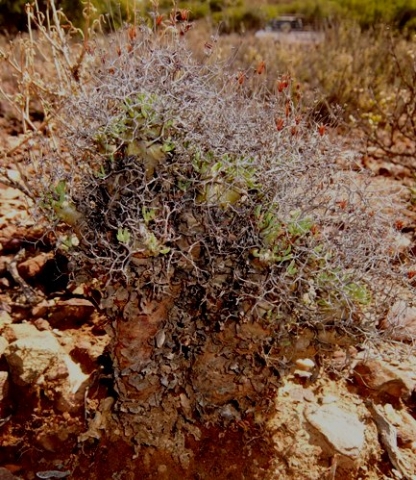 Tylecodon reticulatus subsp. reticulatus shows its imposing, branched and succulent caudex here in the absence of the annual leaf covering. The flaking upper bark is greyer than the brown of the new layer. Leaf scars upon the sifkop stems tend to disappear with the peeling bark.

A grey mane of wiry, old inflorescence stalks still harbour some red-brown remains of old fruit from last season's crop. Some green clusters of new stem-tip leaves have just appeared for this March photo, probably in response to early rain. The dry woody top serves as protection for the luscious leaves.

This subspecies of T. reticulatus is the only one that grows in the Little Karoo. The other one, subsp. phyllopodium, only grows in the northwest of the Northern Cape and southern Namibia (Smith, et al, 2017; Vlok and Schutte-Vlokwww.redlist.sanbi.org).