Home » GENERA T-Z » Tylecodon » Tylecodon paniculatus
Back to Category Overview
Total images in all categories: 12,058
Total number of hits on all images: 7,353,488 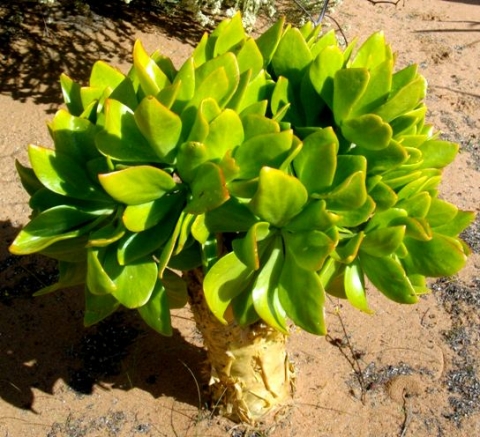 Tylecodon paniculatus is a perennial succulent that reaches 1,8 m in height if the inflorescence is added, sometimes taller (SA Tree List No. 137.1). This makes it the largest of the Tylecodon genus. Tylecodon was separated from Cotyledon in 1978, receiving its name from an anagram of the original.

T. paniculatus is found in Namibia and along the South African west coast and adjacent inland parts of the Western Cape and Northern Cape, slightly into the Eastern Cape. This plant was seen at Kagga Kamma.

The habitat is karoid plains and slopes in sandy soils and among rocks. The species is not considered to be threatened in its habitat early in the twenty first century.

This plant hybridises in the veld with T. wallichii, a species that overlaps with the botterboom in much of its distribution range (Vlok and Schutte-Vlok, 2010; Manning, 2009; http://redlist.sanbi.org).