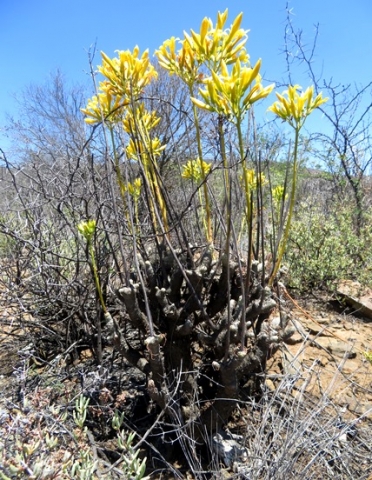 Tylecodon is a genus of thick-stemmed shrublets, occasionally shrubs and rarely miniature trees in the Crassulaceae family. The plants grow cartilaginous branches that are mostly erect, rarely decumbent. The simple, fleshy or succulent leaves are spirally arranged and seasonally deciduous.

The inflorescence is usually a cluster in the form of a thyrse, the few exceptions are spike-like and few-flowered. There are small bracts on the peduncle below the flowers. The calyx is five-lobed.

The five corolla lobes are fused low-down into a tube that is longer than the free lobe parts at the top. Each flower has ten stamens in two whorls. The base of each filament usually has a tuft of hairs where it joins the inside of the corolla tube in its lower third. The anthers are usually exserted. There are five squamae or scale-like nectary glands at the ovary base inside the flower. The five carpels are usually free, their styles distinct on top. The ellipsoid seeds are longitudinally ridged with latitudinal striations in the grooves.

There are 41 Tylecodon species, all occurring in southern Africa. Some species may be confused with Cotyledon, another Crassulaceae genus, if it were not for the summer deciduous Tylecodon leaves. Cotyledon flowers are usually pendulous, not upright as those of Tylecodon. The Tylecodon name is an anagram of Cotyledon, formerly a part of the latter genus.

Tylecodon plants are toxic to livestock, seldom browsed by animals other than porcupines. The plants are popular in horticulture, to be planted in conditions compatible with their habitat requirements.