Home » GENERA T-Z » Tylecodon » Tylecodon cacalioides
Back to Category Overview
Total images in all categories: 11,241
Total number of hits on all images: 5,956,249 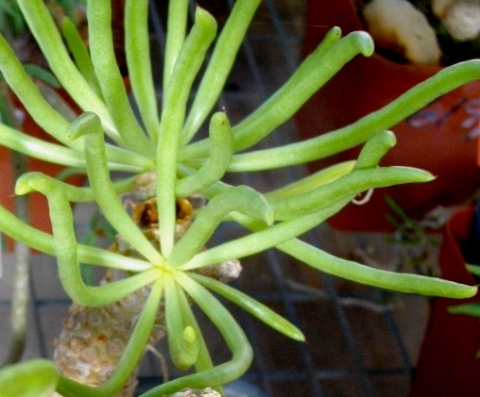 Previous
Image 1 of 55
Next

Tylecodon cacalioides is both stem and leaf succulent, a deciduous perennial growing to heights around 1 m; by then over 4 cm thick. The pale, fleshy stem branches much, mostly near the top, presenting a dense covering of stem-tip leaves in season. The stem has a knobbly surface, each old leaf that drops off leaving its mark; the stems grey to yellowish with bark peeling.

The narrow, succulent leaves that develop channels on their upper surfaces are grey-green or pale green and curve upwards. They become 7 cm long and 5 mm wide.

When not in flower, the plants resemble T. wallichii, but the flowers are dissimilar.

The distribution of this species is in the Little Karoo, mostly from Ladismith to De Rust, some also found towards Uniondale. The plants form part of the local scrub vegetation, sometimes among guarri or renosterbos. The species is not considered to be threatened in its habitat early in the twenty first century (Vlok and Schutte-Vlok, 2010; www.succulent-plant.com; www.redlist.sanbi.org).