Home » GENERA T-Z » Trachyandra » Trachyandra tortilis
Back to Category Overview
Total images in all categories: 9,765
Total number of hits on all images: 4,385,455 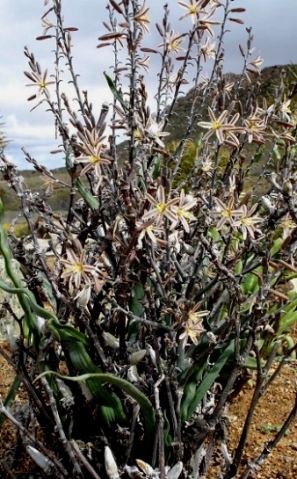 Trachyandra tortilis is a small rhizomatous plant of Namaqualand, but also more widely along the west coast from the Richtersveld to the Knersvlakte and Saldanha. The plant grows in deep sandy or silty soils, among stones or in river beds. It reaches about 10 cm to 15 cm in height.

This is one of the bulbous species of this dry area with strap-like leaves that tend to become spirally twisted, tightly coiled or crisped. The specimen in the photo displays only limited signs of the crinkly tendency: zigzag in places, straight and smooth elsewhere. Some specimens show much more of this leaf shape. Leaf margins may have hard, cartilaginous ridges.

The plant is considered to have a stable population in its distribution early in the twenty first century (www.flickr.com; http://redlist.sanbi.org).