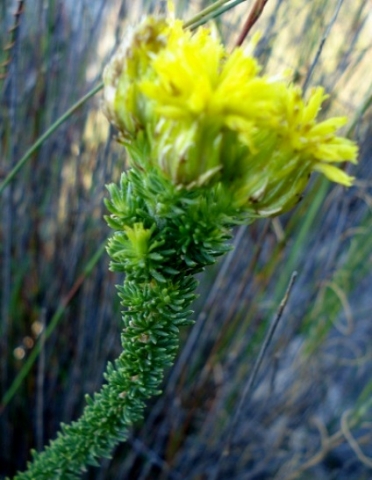 Pteronia stricta var. stricta is a sparsely branched shrub that grows erect stems from about 30 cm to 1,5 m in height. The plant is commonly known in Afrikaans as kaatjiegert, recognising a person, now unknown, who may have been associated with the shrub in the past. Being single-stemmed, it resprouts after fire.

The leaves are smooth, narrowly oblong or linear, crowded densely on the stems. Leaves are about 1 cm long and less than 2 mm wide.

The species distribution is in the Western Cape, mainly the Little Karoo where it is often seen on the Swartberg north of Oudtshoorn where this photo was taken and on the Rooiberg between Calitzdorp and Van Wyksdorp.

The habitat is arid, montane fynbos. The plant is not considered to be threatened, its population stable in habitat early in the twenty first century.

It is not much browsed, although the stems are eaten by rodents (Vlok and Schutte-Vlok, 2010; iSpot; www.redlist.sanbi.org).