Home » GENERA P » Pteronia » Pteronia pallens
Back to Category Overview
Total images in all categories: 11,779
Total number of hits on all images: 6,931,917 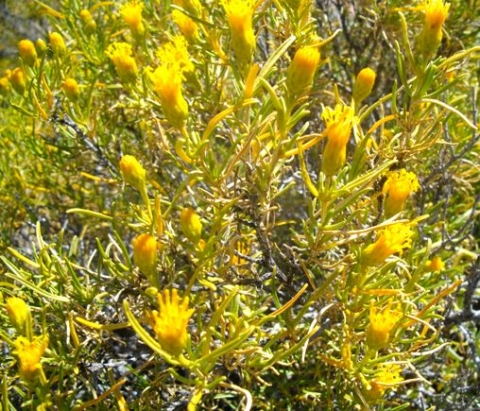 Pteronia pallens is a perennial, much branched, woody shrub that grows pale stems to 1 m. It doesn’t resprout after fire. The leaves are opposite, thread-like and blunt-ended; they are smooth, long and narrow, channelled on top as the margins turn up. Young growth is bright green.

Flowerheads grow at stem tips; pale green bracts surround the cluster of about twelve yellow to orange disc florets. There are no ray florets or daisy-like outer petals. The involucral bracts are not sticky or only slightly so on this species. Blooming happens in spring and summer.

P. pallens is a shrub of the Western Cape and Northern Cape, particularly the Little Karoo and western parts of the Karoo, growing in loamy or sandy slopes and plains, often on calciferous land. It is commonly known as the aasvoëlbos (vulture bush) and by many other parochial names in its distribution area, including armoedsbos (poverty bush) and witbas (white bark).

The plant is not browsed as it is toxic, containing a liver poison. It may predominate in poorly managed veld (Shearing and Van Heerden, 2008; Vlok and Schutte-Vlok, 2010; Vahrmeijer, 1981).