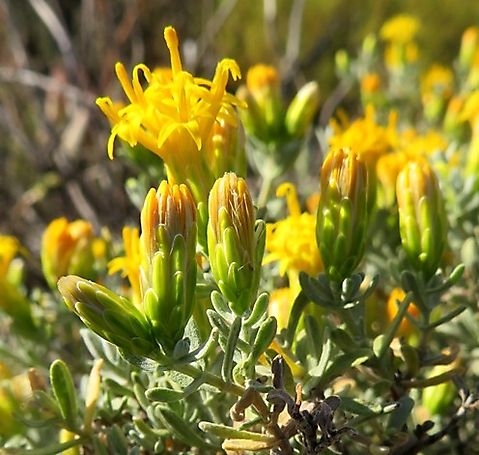 Pteronia is an Asteraceae genus of shrubs or shrublets that are often sticky, rarely spiny. A few species are noted for their decumbent branches that root at the nodes.

The leaves are opposite in more cases than alternate, sometimes fascicled. The blades are leathery, sometimes succulent and may be woolly, warty or hairy. The margins are entire, sometimes hair-fringed.

The flowerheads are solitary or clustered in corymbs, varying in number. Only disc florets are borne, surrounded by involucres comprising four to ten rows of bracts with hairless, fringed or membranous margins. The cylindrical, ovoid or bell-shaped involucres have receptacles that are often honey-combed and gummy. Plants of the genus are often called gomknoppe (glue knobs) in Afrikaans.

The bisexual, tubular florets end in five lobes, usually yellow, sometimes purple or greenish and widening to the top. The anthers are linear, the style cylindrical and its branches usually flattened and lanceolate. The pappus is usually two rows of straw-coloured or purplish bristles, fused at the base.

There are about 80 species, mostly occurring in southern Africa, some in Australia. About 20 species grow in the Little Karoo and 20 in the fynbos. Some of them are used medicinally, while several are browsed.