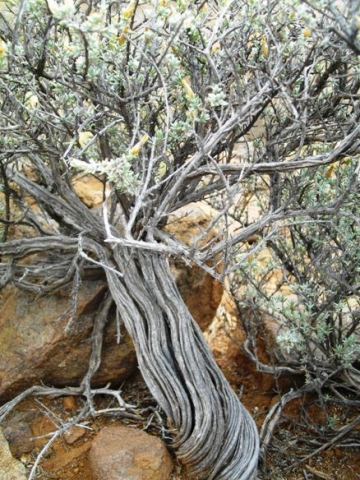 This impressive old stem was found on a Pteronia glauca plant in the Karoo National Park, suggesting great age and survival capacity in its challenging, arid habitat. Unfortunately the flowers had gone by the time of the photo at the end of October.

The plant is not much browsed. A local Afrikaans name of boegoekaroo (buchu of the Karoo) suggests traditional medicinal use; the buchus having played a large role in that field. Some other Pteronia species are well known for such applications, such as P. camphorata and P. incana, but not this one (Shearing and Van Heerden, 2008; Vlok and Schutte-Vlok, 2010; Van Wyk and Gericke, 2000).