Home » GENERA P » Pteronia » Pteronia glauca
Back to Category Overview
Total images in all categories: 11,528
Total number of hits on all images: 6,611,418 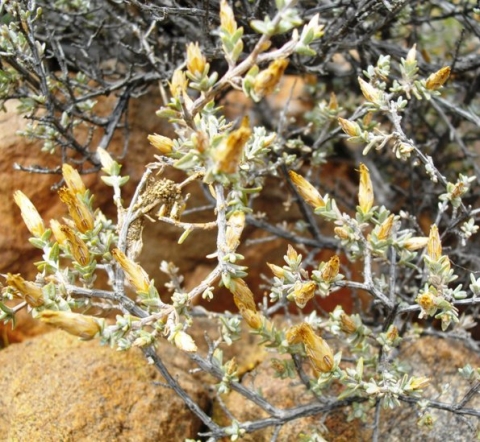 Pteronia glauca is a branching shrub that grows to 80 cm in height and more than that in width. The tiny narrow leaves are opposite, blue-grey and finely woolly. Flowerheads are narrow, smaller than the other Karoo Pteronia species and produce yellow disc flowers in spring. Young stems may be hairy. Branches may grow adventitious roots, allowing the plant to spread.

The habitat is the arid inland, the plants growing in loam soils with underlying calcrete, on floodplains and seasonal river beds. The species is not considered to be threatened in its habitat early in the twenty first century (Vlok and Schutte-Vlok, 2015; Shearing and Van Heerden, 2008; http://redlist.sanbi.org).