Home » GENERA P » Pteronia » Pteronia flexicaulis
Back to Category Overview
Total images in all categories: 11,528
Total number of hits on all images: 6,611,573 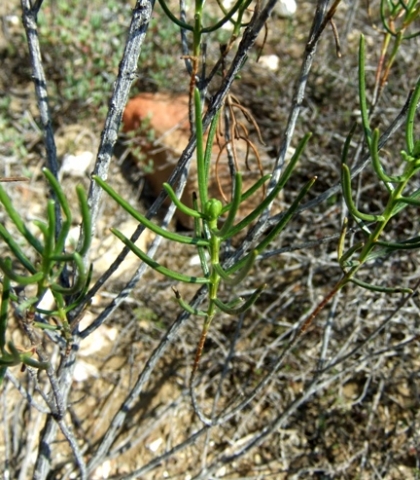 Previous
Image 8 of 42
Next

Pteronia flexicaulis, yet another member of the genus called gombos (gum bush) in Afrikaans, is a sticky-leaf shrub that grows to 1 m. Old stems are grey and rough surfaced, woody and bare.

The bright green leaves are distributed sparsely, opposite and decussate (consecutive pairs perpendicular to each other) on the green, upper stem parts. The leaves are linear, thread-like, ascending and often incurved. They become 4 cm long and 3 mm wide. A tiny groove or channel is visible on the upper surface.

P. flexicaulis flowerheads grow at stem tips, solitary or in groups of up to three. These narrow flowerheads have yellow disc florets growing in a tuft.  The florets are double the length of the involucre that comprises a few rows of pointed, green bracts, sticky like the leaves. One stem-tip in picture is budding in August; flowers normally expected by summer.

The distribution is in the Western Cape, the Little Karoo and drier fynbos to the west, as far as Ceres.

The habitat is karoid scrub on stony slopes in clay soils. The species is not considered to be threatened in its habitat early in the twenty first century (Vlok and Schutte-Vlok, 2015; iSpot; JSTOR; http://redlist.sanbi.org).