Home » GENERA P » Polygala » Polygala umbellata
Back to Category Overview
Total images in all categories: 12,086
Total number of hits on all images: 7,387,263 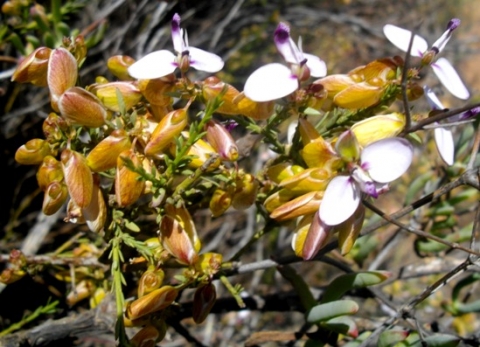 Although the flowers are white, this plant seen in the southern Cape near Van Wyksdorp in October is thought to be Polygala umbellata. The thin green branches have narrowly elliptic, almost needle-like, straight leaves that ascend and are sparse and inconspicuous.

The flowers grow in dense, nearly flat-topped clusters at branch ends. They are mostly still closed here, displaying the brownish outside surfaces of the lateral sepal lobes, while a few are widely open and very white inside. The keels are purple near their tips. Flowering happens from late winter through spring.

P. umbellata is a slender shrub with sprawling branches that grows to 40 cm from a woody rootstock. The distribution lies in a strip along the southern coast of the Western and the Eastern Cape. The plants occur mainly on lower dry slopes and flats in clayey or sandy soils (Manning, 2007; Bean and Johns, 2005).