Home » GENERA P » Polygala » Polygala myrtifolia flower
Back to Category Overview
Total images in all categories: 12,086
Total number of hits on all images: 7,387,265 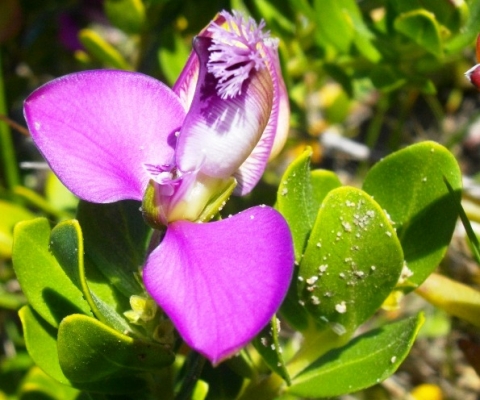 Flowers of the September bush or Polygala myrtifolia as it is known botanically, appear in short terminal racemes.

The two lateral sepals that spread widely are prominent. So is the keel ending in its whitish crest. Similar crests occur on flowers of other members of the Polygala genus, helping to distinguish them from Fabaceae flowers that are superficially similar.

Flower colours on some forms of P. myrtifolia may vary much: pink, white, scarlet, magenta, purple or mauve ones may be found. The leaves are elliptic or oval and bright green, resembling those of the myrtle tree according to the specific name.

The generic name is derived from the Greek words polys meaning much and gala meaning milk, based on a belief that some Polygala species contribute to better milk production when cows are fed on these plants (Bean and Johns, 2005; www.plantzafrica.com).