Home » GENERA P » Polygala » Polygala amatymbica
Back to Category Overview
Total images in all categories: 12,086
Total number of hits on all images: 7,387,232 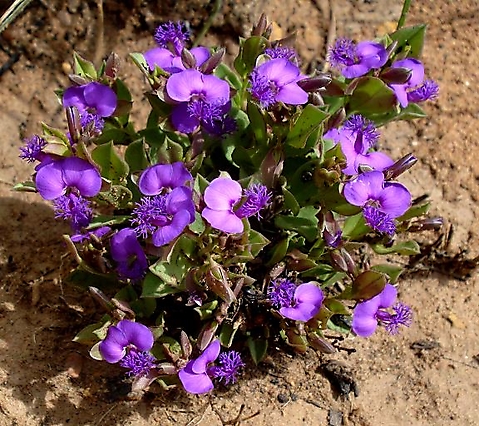 Previous
Image 1 of 35
Next

Polygala amatymbica is a tufted, dwarf perennial growing from a woody taproot. The leafy plant branches from the base, reaching heights around 15 cm. The specific name, amatymbica, is derived from the amaThembu cattle farming tribe of the Eastern Cape.

The alternate, simple leaves are nearly stalkless. The leaf-shape is ovate or elliptic, tapering to pointed tips. The plant is variable, both in leaf-shape and size.

The species distribution is widespread in the eastern parts of South Africa from the Eastern Cape, KwaZulu-Natal and the Free State, as well as the provinces north of the Vaal River and some neighbouring countries. The photo was taken in the Magaliesberg.

The habitat is grassland and thicket. The species is not considered to be threatened in its habitat early in the twenty first century.

The plant is or has been used in some areas to stimulate milk production in cows (Pooley, 1998; Van Wyk and Malan, 1997; Germishuizen and Fabian, 1982; iNaturalist; http://redlist.sanbi.org).