Home » GENERA P » Pachypodium » Pachypodium succulentum
Back to Category Overview
Total images in all categories: 12,061
Total number of hits on all images: 7,359,681 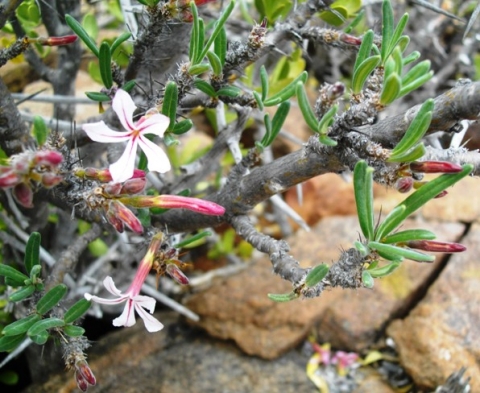 Pachypodium succulentum has narrow green leaves that are oblong or linear in shape, with rounded tips and bases. They appear in whorls and the leaf margins are rolled under. The spines are plentiful, long and thin, growing in pairs.

The flowers appear in terminal and axillary clusters. They are narrowly tubular with five long recurving petal lobes. Flower colour is white or pale pink with dark pink central lines that disappear towards the lobe apices, sometimes very dark into the tube throat. Flowering time is spring and summer. This picture was taken late October in the Karoo National Park near Beaufort West.

The plant’s branched stems and leaves are similar to those of P. bispinosum, that grows at least partly in the same habitat. The appearance of the flowers allow for easy identification. Porcupines feed on the caudex, although the plant survives this and heals over time (Vlok and Schutte-Vlok, 2010).