Home » GENERA P » Pachypodium » Pachypodium lealii, three pachs on a peak
Back to Category Overview
Total images in all categories: 12,061
Total number of hits on all images: 7,359,608 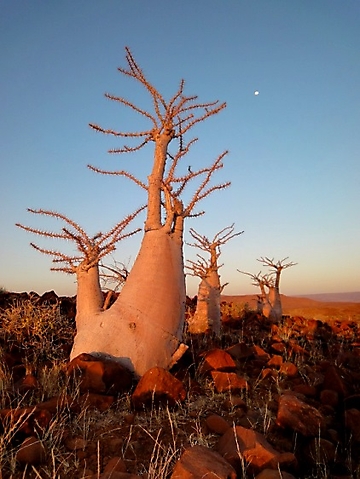 When appearing in threes, phenomena tend to have more significant impact on people’s minds, whether they come as wise men, blind mice, musketeers, amigos, piglets or bears.

In some cases, a fourth one lurks, like d'Artagnan or another wise man, for the mind entertains doubt, as the eyes can be deceived. See, there's a moon of sorts over the trees while the sun shines.

Three fat Pachypodium lealii trees far in the Kaokoland veld, although not pachs in a pod, have a great chance of being remembered, whether a camera was available for the occasion or not.

The rewards bestowed on people for time spent in remote places, anticipated by those globetrotters that shun the crowds, are more than the silence, the aloneness or the rediscovery of dimensions of self…  for those are the given benefits, the repeats.

What is more than this, what makes people take time and trouble for return visits and exploring further in a sometimes lifelong habit, is that vague to explicit anticipation, the hope or conviction, never quite articulated because that would spoil it:

The inevitable astonishments, the surprises of the bush, the new faces of the wild that nature holds in store and may show only once. So, the trip must be taken, in spite of the family having other ideas.

Every animal encounter, every new plant, or old one in a new guise adds image, story and memory. It shapes consciousness subtly, even the self in its fluidity of meanings. The internal centre of gravity in the spirit is repositioned by experience relative to what this life has been about so far. It may overwhelm in poignant insight, or add appetite for more.

The bush has its ways with the mind. Below the radar of consciousness, different things go on imperceptibly in the mind that takes time to chill out there under sun or stars, anchoring and directing the psyche for good kinds of observing, living and being.

Nature relates both uniquely and in standard protocol to every observer, to every animal of earth. It bestows a personalised package of similar experiences to recall and to mull over; internalised as the shaping tools for becoming, at least different or better, maintaining or renewing.