Home » GENERA P » Pachycarpus » Pachycarpus schinzianus
Back to Category Overview
Total images in all categories: 12,061
Total number of hits on all images: 7,359,597 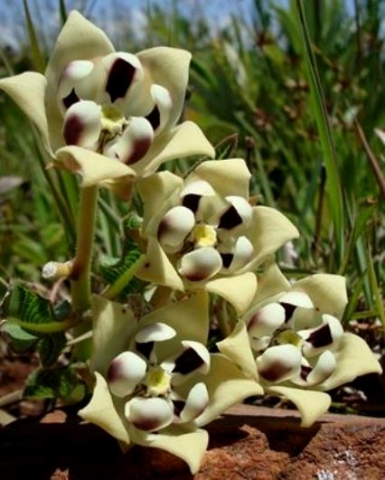 Pachycarpus schinzianus, commonly known as the lilac pachycarpus and in Afrikaans as bitterwortel (bitter root), is an erect perennial growing from a rootstock to heights around 50 cm. Plant parts exude a milky sap.

The short-stalked, simple leaves are large, narrowly lance-shaped, tapering to acutely pointed tips. The blades are rough-textured, and variably hairy. The conspicuous midrib is cream-coloured. Numerous creamy yellow lateral veins ascend slightly to the margins but branch close to it and join each other rather than reaching it. The margins are entire and wavy, cream- or red-rimmed.

The flowers grow in flat-topped umbels from stem-tips. The flat-topped buds are often pinkish to dark red on top. The five short, green sepals are acutely pointed and hairy, in picture veering away from the corolla slightly in their tips.

The pale cream, sometimes lilac-tinged corolla is cup-shaped. Its five lobes are pointed and curving out, joined at the base. The corolla is about 3 cm in diameter. The corona lobes are incurved and round-tipped, about white with dark violet bands down their inner surfaces.

Flowering happens in spring or late spring, sometimes in summer as well.

The inflated fruit follicles are spindle-shaped, usually solitary as one of the pair tends to abort.

The species distribution is widespread in the northeast of South Africa, not found in the Western, Eastern or Northern Cape but occurring in some neighbouring countries.

The habitat is stony grassland, common on the highveld. The species is not considered to be threatened in its habitat early in the twenty first century (Manning, 2009; Van Wyk and Malan, 1997; Germishuizen and Fabian, 1982; iNaturalist; http://redlist.sanbi.org).