Home » GENERA P » Pterygodium » Pterygodium catholicum
Back to Category Overview
Total images in all categories: 12,086
Total number of hits on all images: 7,387,272 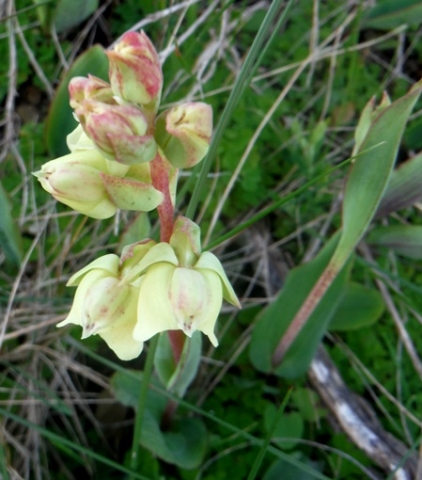 Previous
Image 2 of 42
Next

Pterygodium catholicum, commonly known as the cowled friar or in Afrikaans as the moederkappie (mother bonnet), is a tuberous perennial reaching 40 cm when in bloom. The specific name catholicum (Latin) means general or universal, referring to the widespread distribution of this orchid.

Note the pointed lateral sepals on the sides of the paler cream and larger petals of the down-turned open flowers at the bottom of the inflorescence. The floral bracts and sepal surfaces on the closed buds at the top are marked with pale red.

The species is common in the Cape Floristic Region, occurring from the Bokkeveld Mountains and the Cape Peninsula in the west to Port Elizabeth in the east.

The habitat is clay flats or sandy soil in seasonally moist places in renosterveld and fynbos at elevations between 15 m and 1600 m. The species is not considered to be threatened in its habitat early in the twenty first century (Liltved and Johnson, 2012; Manning, 2009; Vlok and Schutte-Vlok, 2010; www.redlist.sanbi.org).