Home » GENERA P » Pterygodium » Pterygodium dracomontanum
Back to Category Overview
Total images in all categories: 12,086
Total number of hits on all images: 7,387,209 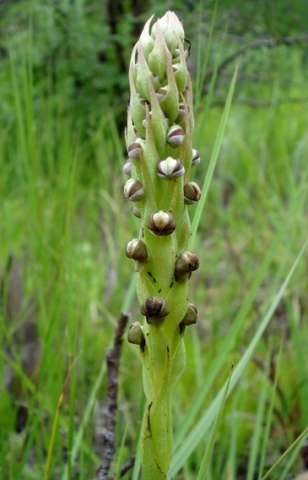 Pterygodium dracomontanum is erect and slender, becoming about 22 cm tall. Its numerous leaves are lance-shaped, nearly linear and spreading, angled upwards around the stem.

As the specific name, dracomontanum suggests, the species distribution is centred and numerous in the Drakensberg are. It occurs, however, more widespread although less densely populated from Mossel Bay in the southern Cape along the eastern parts of South Africa and beyond the border to Malawi and Tanzania. This plant was seen in the Sani Pass.

The habitat of P. dracomontanum is mainly grassland, often montane, but plants may also be found at altitudes as low as 180 m. The species is not considered to be threatened in its habitat early in the twenty first century (Liltved and Johnson, 2012; Wikipedia; www.redlist.sanbi.org).