Home » GENERA P » Prenia » Prenia sladeniana
Back to Category Overview
Total images in all categories: 12,058
Total number of hits on all images: 7,353,534 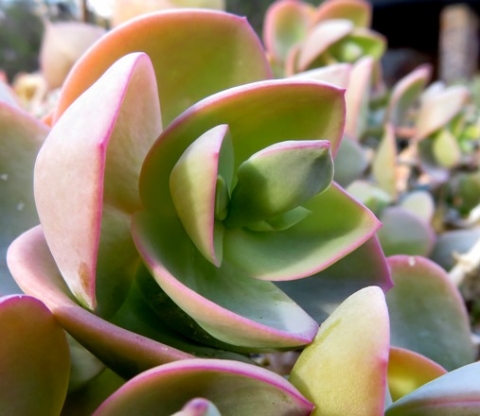 Prenia sladeniana, in Afrikaans commonly known as skotteloor (dish ear), is a prostrate, creeping succulent. Prenes, the Greek word that gave the genus its name means prostrate. There is uncertainty at the time of writing about the name of this plant though. It may have to be changed to Mesembryanthemum sladenianum, a much seen synonym.

The leaves are clustered at the upturned stem-tips, becoming spaced further down where the stems have elongated to internodes of similar length.

The species distribution is in the Richtersveld and southern Namibia around the lower reaches of the Gariep River.

P. sladeniana grows in a region known for arid conditions, only a little winter rain received. The plants grow on lower slopes and in sandy riverbeds, sometimes in large stands comprising numerous plants, particularly in disturbed areas. The species is not considered to be threatened in its habitat early in the twenty first century (Le Roux, et al, 2005; Smith, et al, 1998; Herre, 1971; iNaturalist; http://llifle.com; http://redlist.sanbi.org).