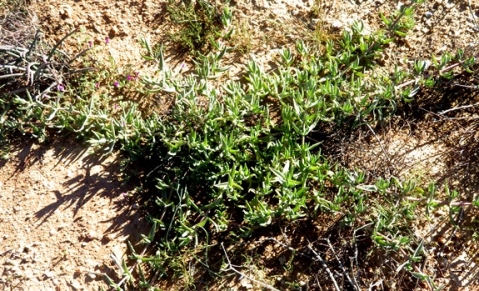 Prenia pallens, in Afrikaans known as the bleek kruipvygie (pale creeping mesemb), is a prostrate perennial growing creeping stems. They radiate from the plant’s basal leaf tuft grown over fibrous roots. The above-ground plant material mostly does not quite cover the patch of ground within the range of its branch tips.

The flowers are borne at stem-tips in few-flowered, cyme-shaped clusters. Two of the four or five sepals are larger than the rest and leafier. The pink, purple, white or yellow petals form two or three whorls around the flower centre.

The sepals and petals are joined at the base in a short tube. The petals are also joined at the base to the stamens and staminodes in the flower centre. There are five stigmas on the partly superior ovary. Flowering happens in spring and early summer. The fruit capsules have four locules.

The species is distributed in the Western Cape from the Peninsula to Namaqualand in the Northern Cape and probably Namibia. There are four subspecies of P. pallens, two of which occur in Namaqualand where this plant was photographed (at Naries). The two are subsp. pallens and subsp. namaquensis. There were no flowers in August, only vigorous leaf growth; no subspecies identification was possible.

The habitat of P. pallens is clay or granite slopes and flats in the winter rainfall region. The plant is common to abundant on disturbed ground like roadsides; a weedy plant, the most widely spread member of the Prenia genus. None of the four subspecies is considered to be threatened in habitat early in the twenty first century (Manning, 2007; Smith, et al, 1998; Manning and Goldblatt, 1996; Herre, 1971; iNaturalist; http://redlist.sanbi.org).